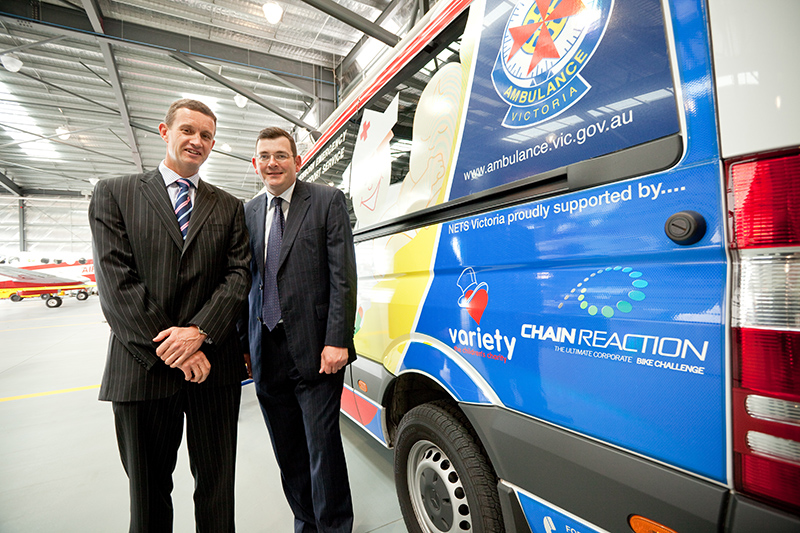 Due the incredible fundraising efforts of the Chain Reaction Corporate Bike Challenge in 2013, PIPER (Paediatric Infant Perinatal Emergency Retrieval) was able to introduce a new purpose built ambulance configured to meet the needs of both Paediatric and Neonatal retrievals. This was the first ambulance of its kind in Victoria.

The Chain Reaction PIPER ambulance provides the Paediatric team with access to both air and oxygen medical gases which enables them to optimise the support provided by the mechanical respirators for these critically ill children.

It has also allowed them to carry extra specific paediatric equipment so they can do back to back transfers without the need to return to base allowing fora quicker retrieval response to get the team to the patient.

The new style ambulance has also benefited the Neonatal retrieval team by allowing the neonatal intensive care cots to be loaded from the side which gives the staff and babies a much smoother ride. This also assists us when undertaking a twin retrieval. Previously the team would have been required to put the two babies in one cot or we would have needed to send two ambulances. By placing two cots into the one vehicle the babies are now able to have their own space and nurse each. It also assists with driver resources, freeing up our additional ambulances to attend to other emergencies.

PIPER staff are very thankful to Chain Reaction for their incredible support and the hard earned donation that made this vehicle possible. It has ensured that PIPER Victoria remains the leader in the provision of Paediatric and Neonatal retrieval services.