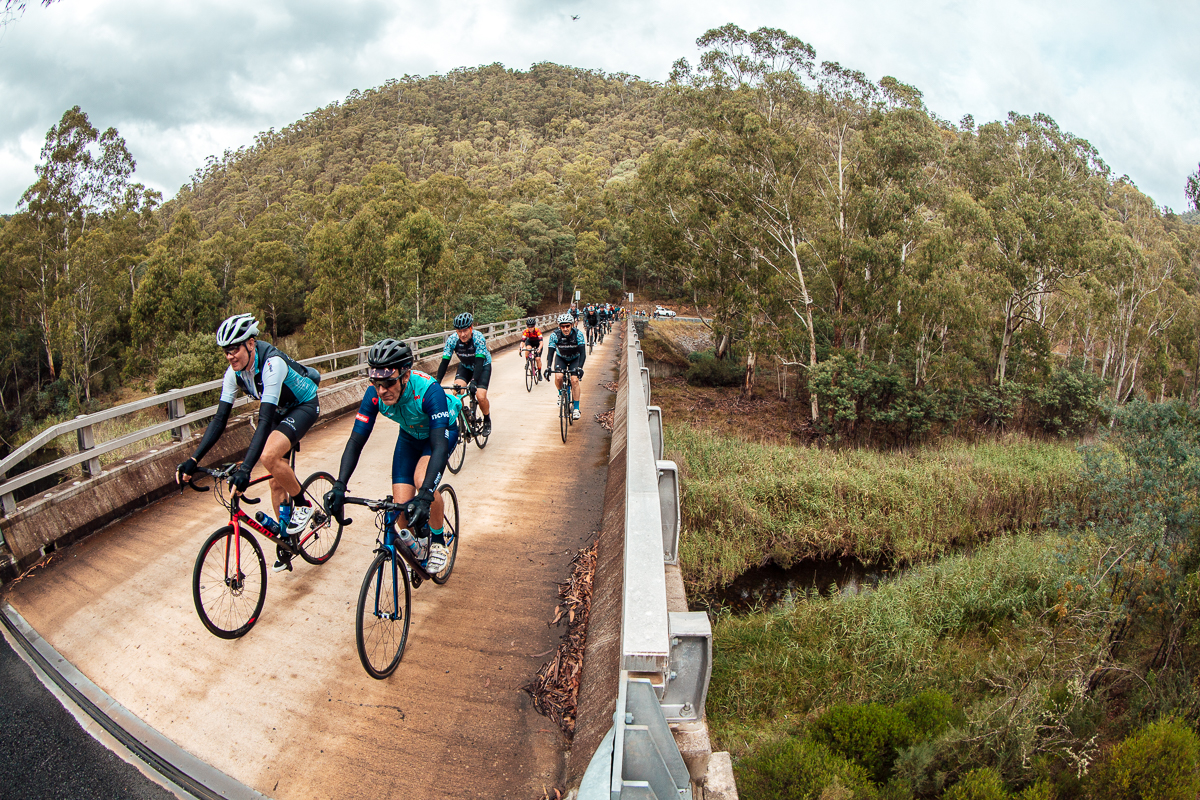 They say that driving through the desert or sailing out to sea rests the soul. But the bloggers reckon that, if you want to empty your mind, neither of them compares to a 20 km descent through the Snowy Mountains. We hurtled down the slippery roads, deep valleys filled with fog to our right, eucalypts climbing up the hills to our left. And you didn’t have time to be present anywhere except right there: taking in all at once the camber of the bitumen, the curves in the road, the distance to the next cyclist, the give on your brakes. There weren’t many of us looking around but you couldn’t help but be affected by the noises and the scents of the Kosciuszko National Park. It was magic.

So much happened today (and so much hurt) but this blog is coming from a little town called Corryong, just across the New South Wales border into Victoria, and now there are happy riders everywhere, being massaged, having a quiet beer or sharing stories of the day. 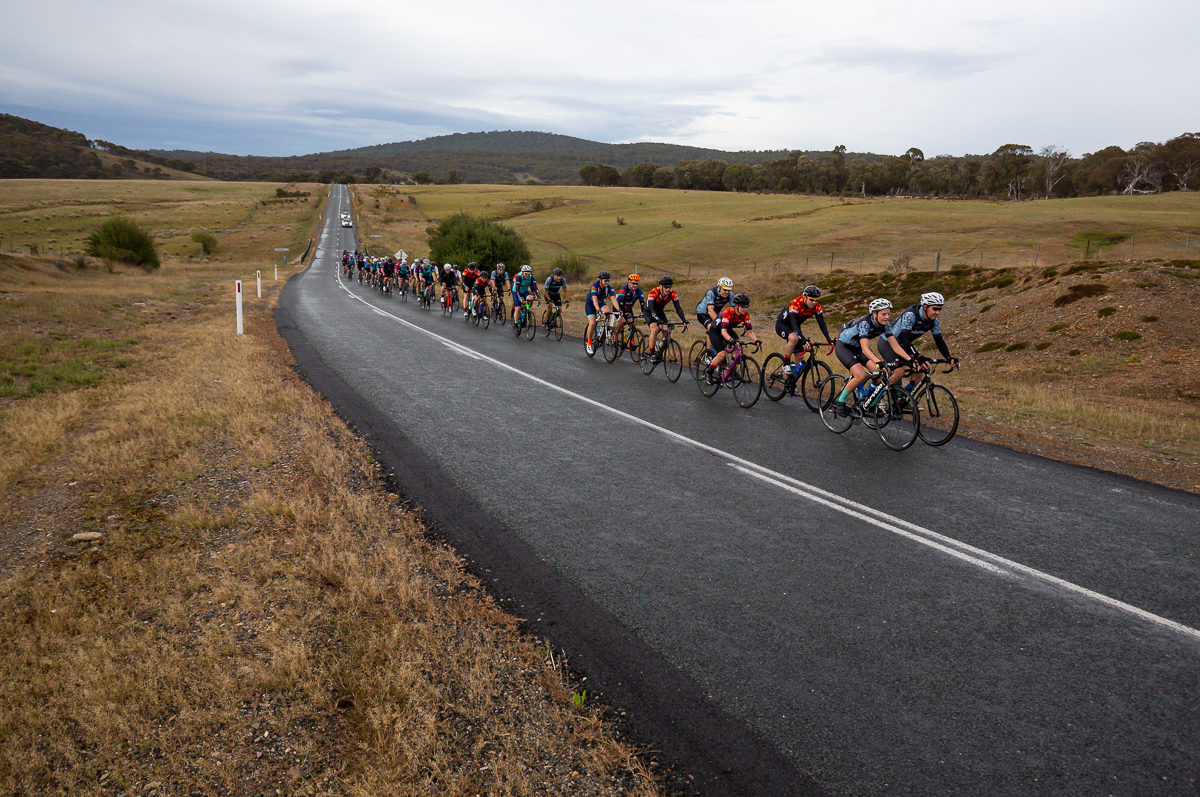 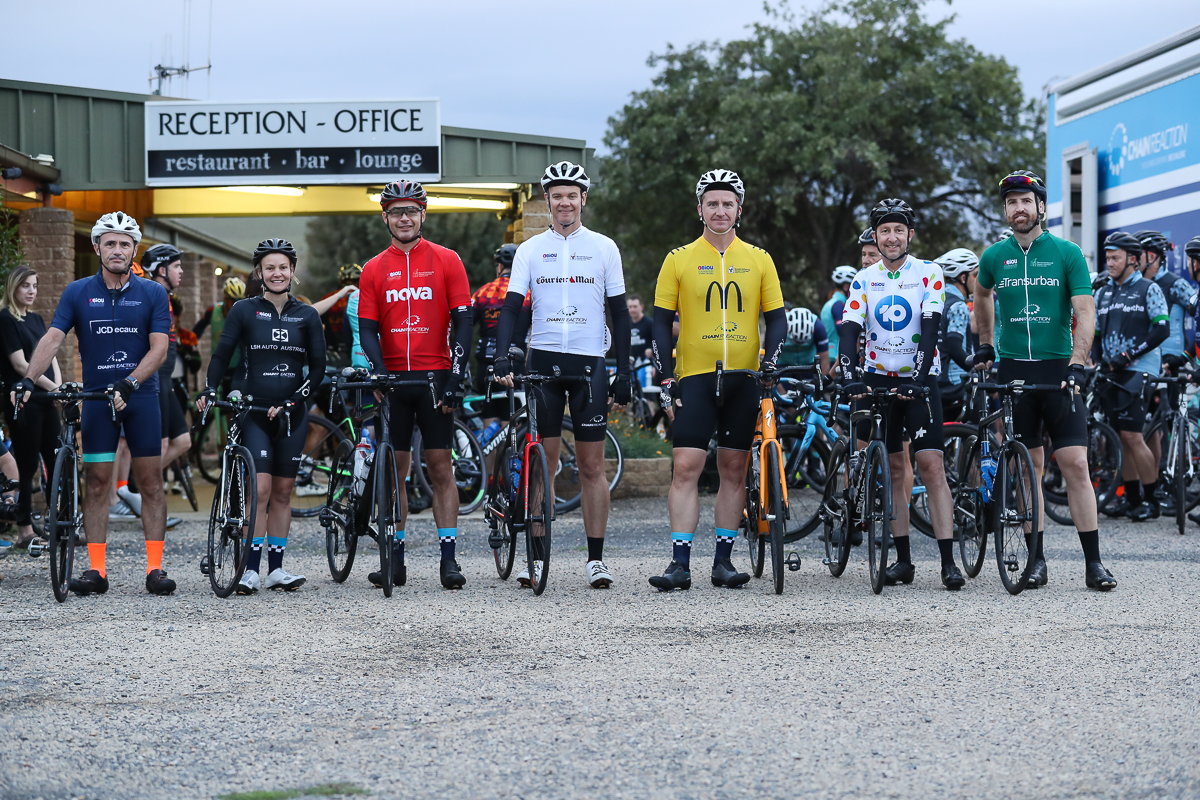 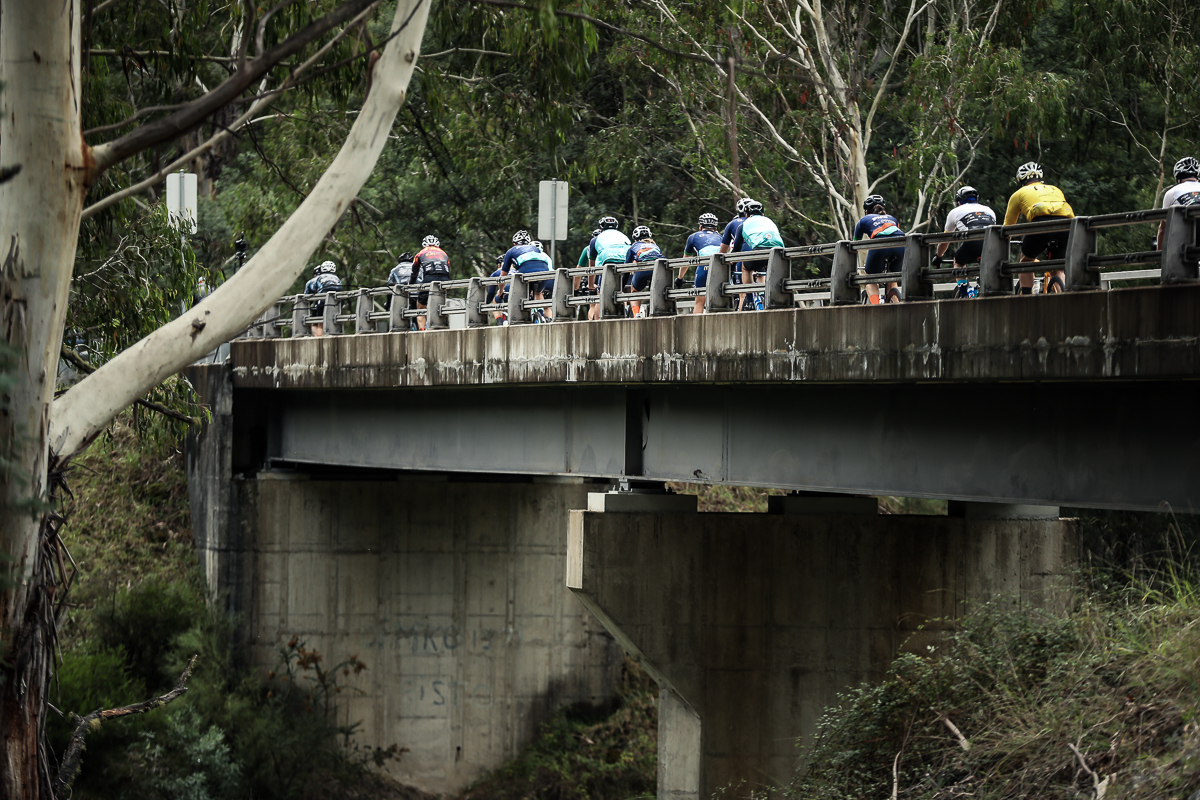 We left Adiminaby just after daylight. The hotel was a little low set brick number built in the 1970’s and it probably does a busy trade in the ski season, but not so much in March. So the owner seemed rather happy to have 60 or so people filling the place, and although we may have been a little rowdy, it was certainly a happy, lively bolt-hole for the night. I like to think that’s why he and his staff were waving us off so exuberantly after breakfast... 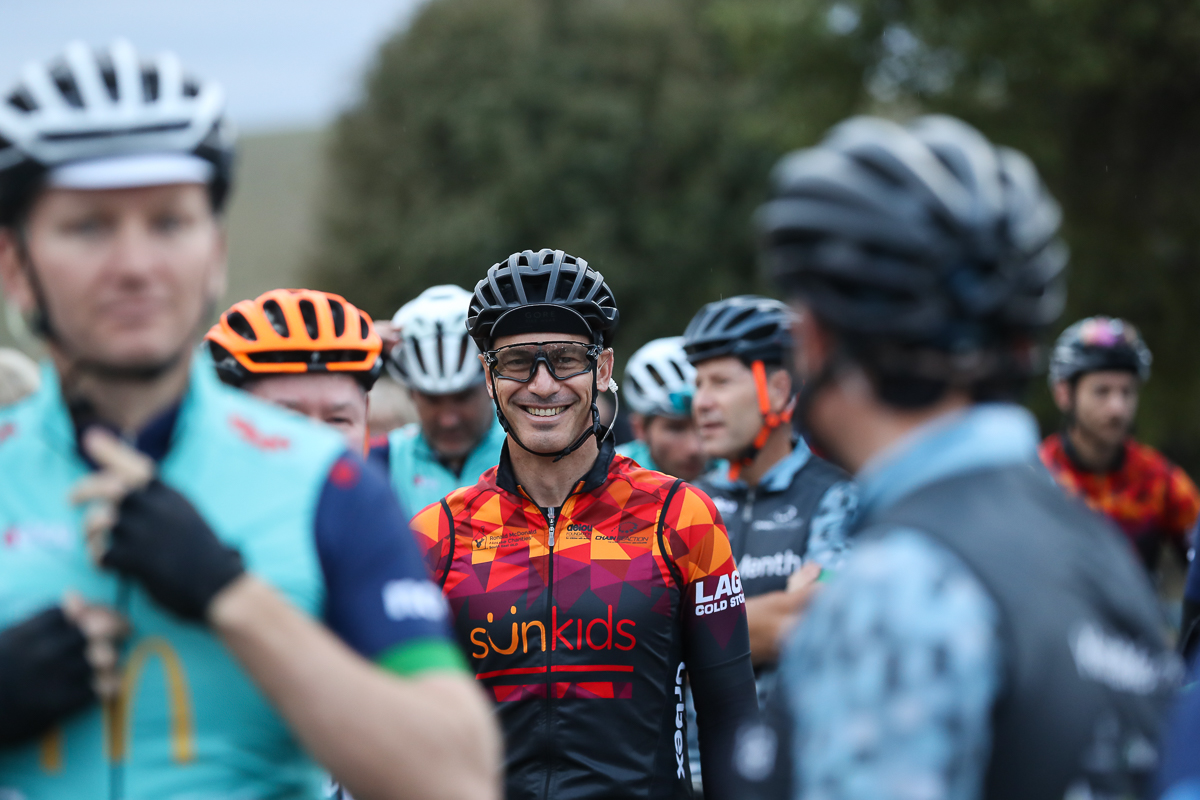 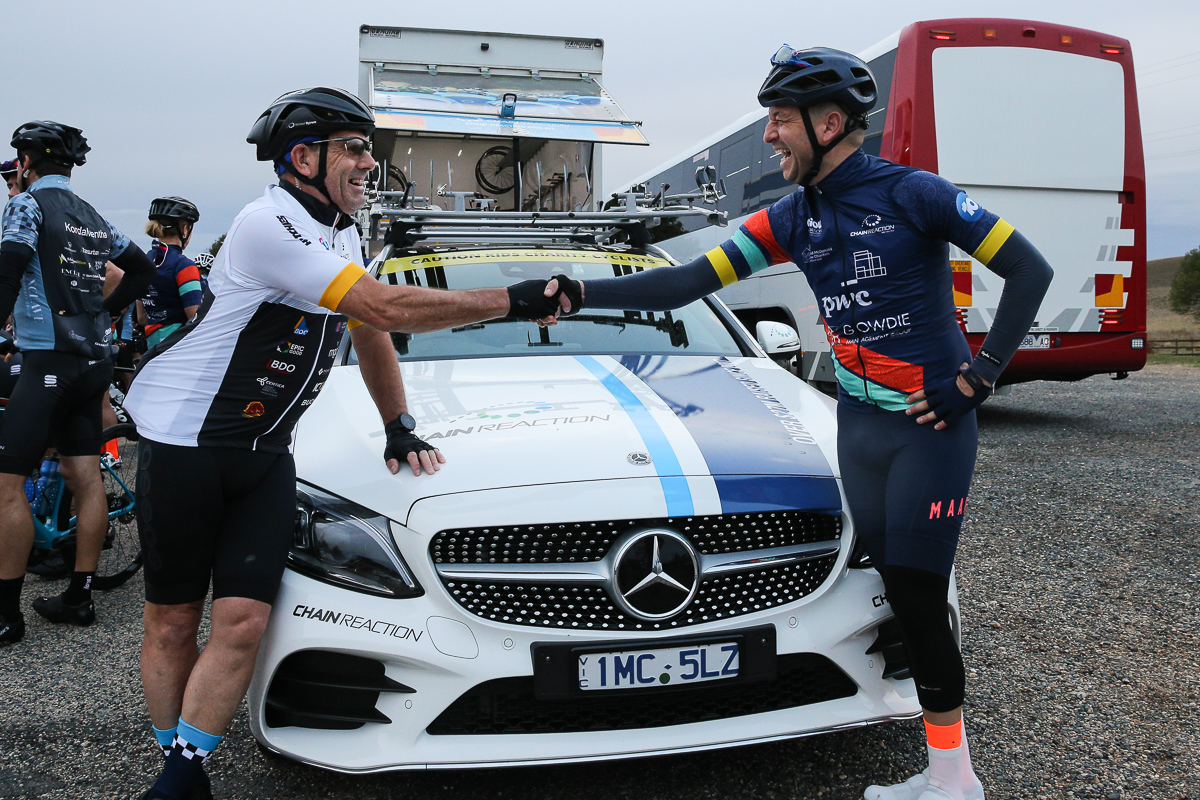 The plan was to ride 130km and 2600 metres today, which we did. And it hurt a lot. We were just digesting the hash browns and porridge when the first hill started on us. And they kept coming. With squalls, and wind, and fog, so that the Garmins said it was 10 degrees but it felt more like 5. We road as a great big peloton – which looks something like a floral semi-trailer – for about 20 kilometres and then we split into our individual teams. That has been something the Queensland chapter has taken away from last year’s trip – that the riders are more comfortable, especially on the narrower roads, when they are working in smaller groups - and its been great to watch. Each team – Gowdie PWC, Sunkids, Korda Mentha, Limitless and Hutchinson – supporting their weaker riders, attacking hills together and engaging in a little banter (lungs permitting). At one stage, Ash Hutchinson, one of our number, but also a former world champion, was cycling with no hands because he was using each of them to push another rider. Something to practice at home...

Anyway, we kept riding in our teams, south west towards the Murray River. The going was very slow with all the climbing and we stopped for a food and drink break at about 40 kms. Not especially hospitable. All huddled around a little cottage on the side of the road, freezing cold, but taking on fuel, and unpacking cold weather kit, hopefully, to see if it was up to the job. The wind seems to dry you quickly if only until the next squall and it was much better to be riding than to be standing. 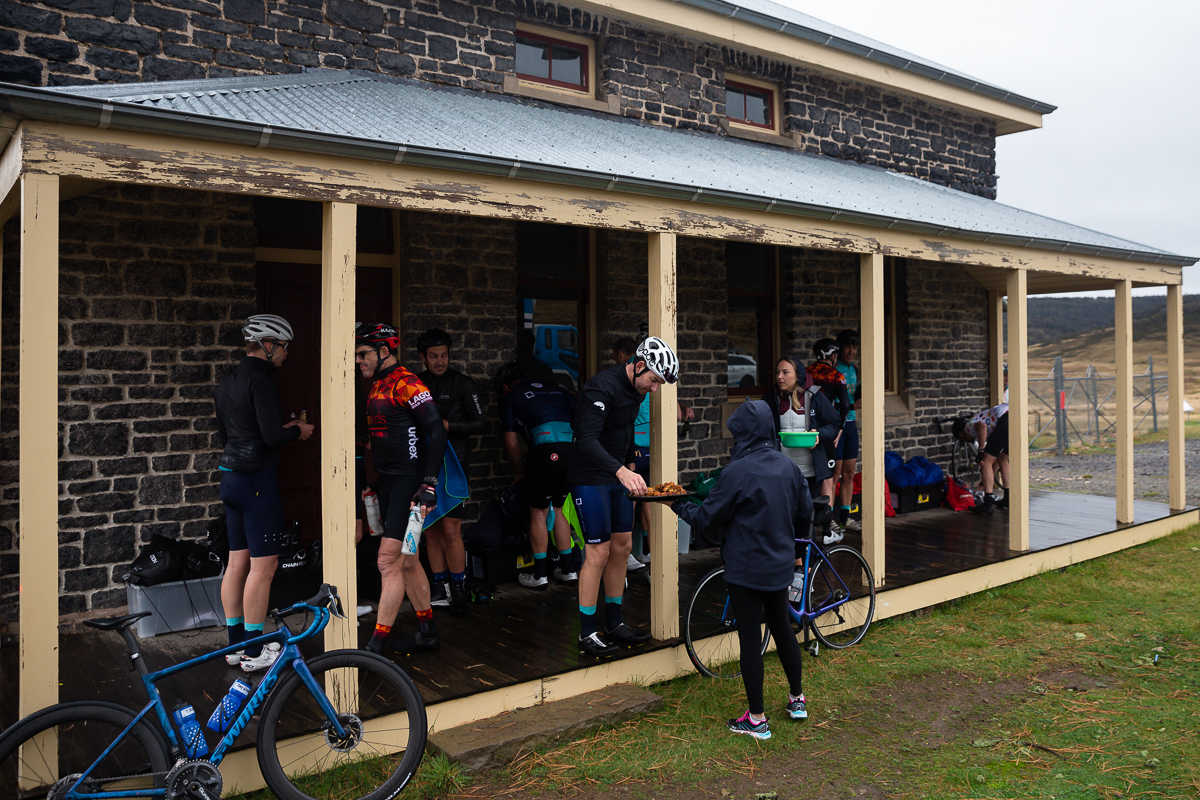 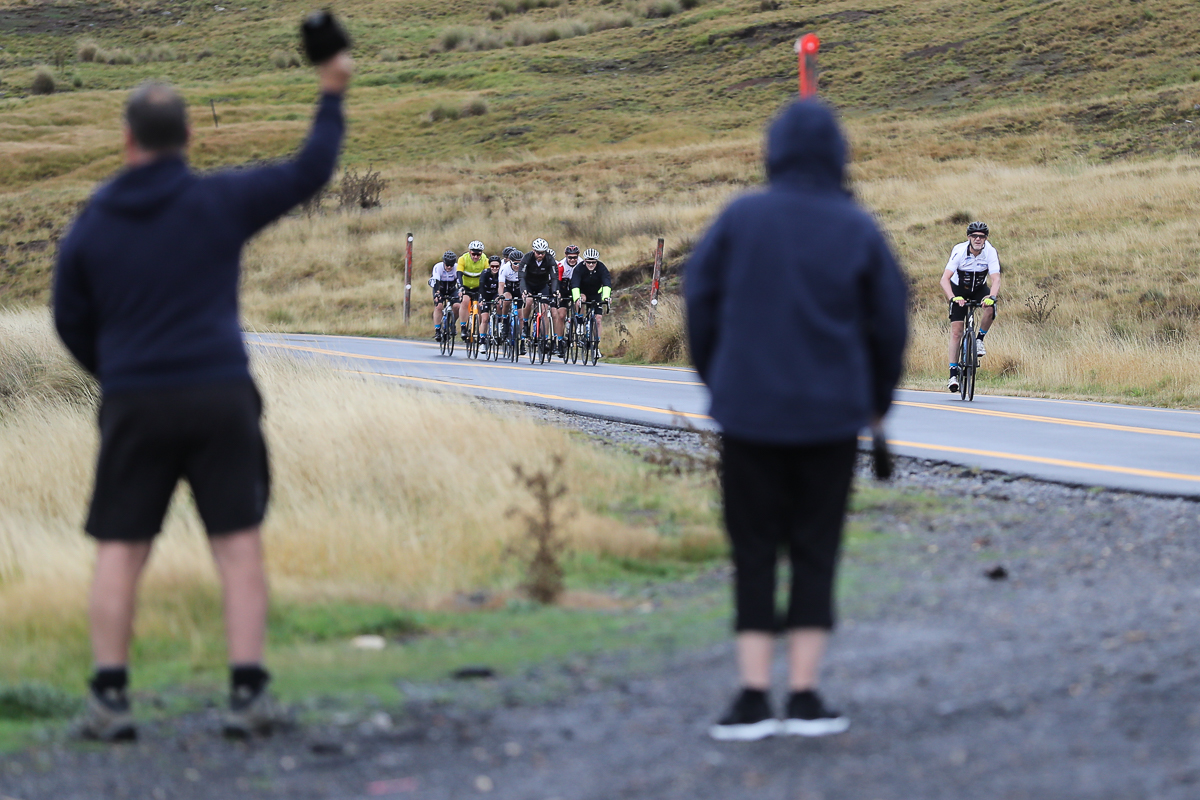 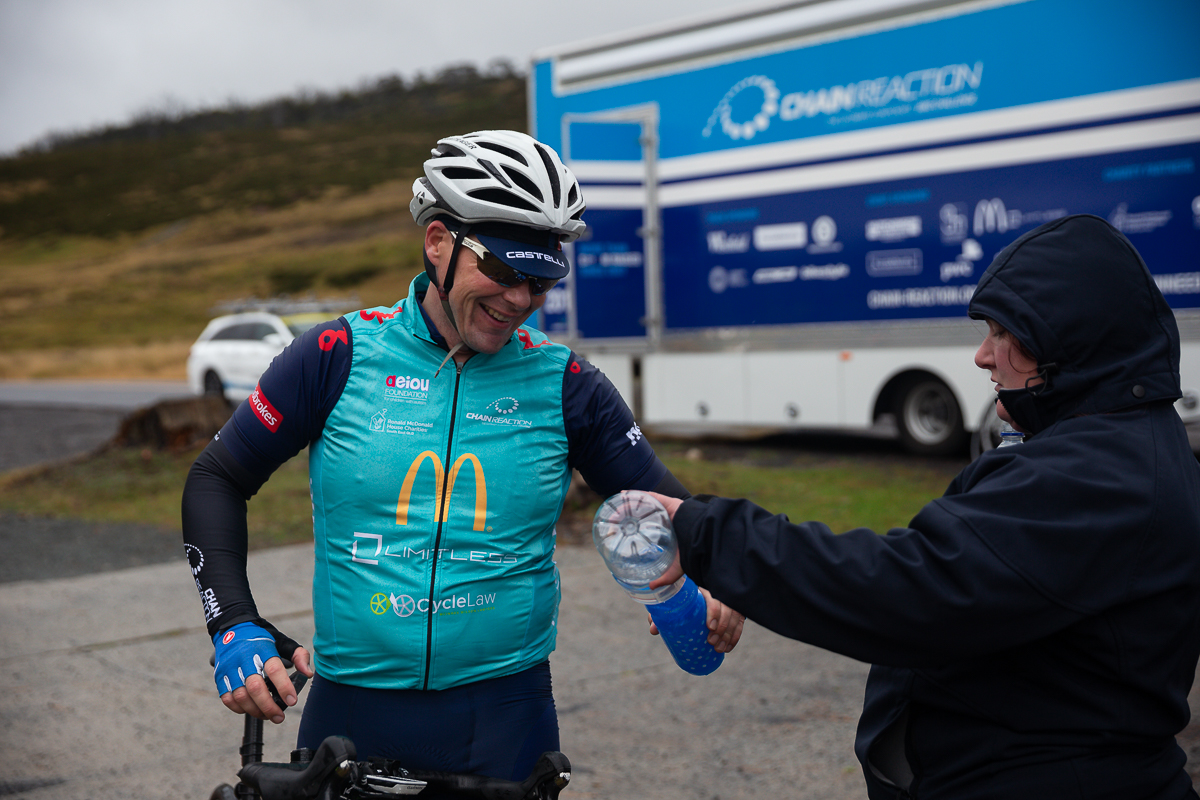 We made lunch at a place called Cabramurra. Donny described it as the highest town in Australia but the lowest point of the trip. There was a warm little place there that seemed to be a ski restaurant but outside was fog and cold, and you peered out through the windows, wondering if you really had to go back there in your lycra. But we did. And that was when we pelted down that descent. 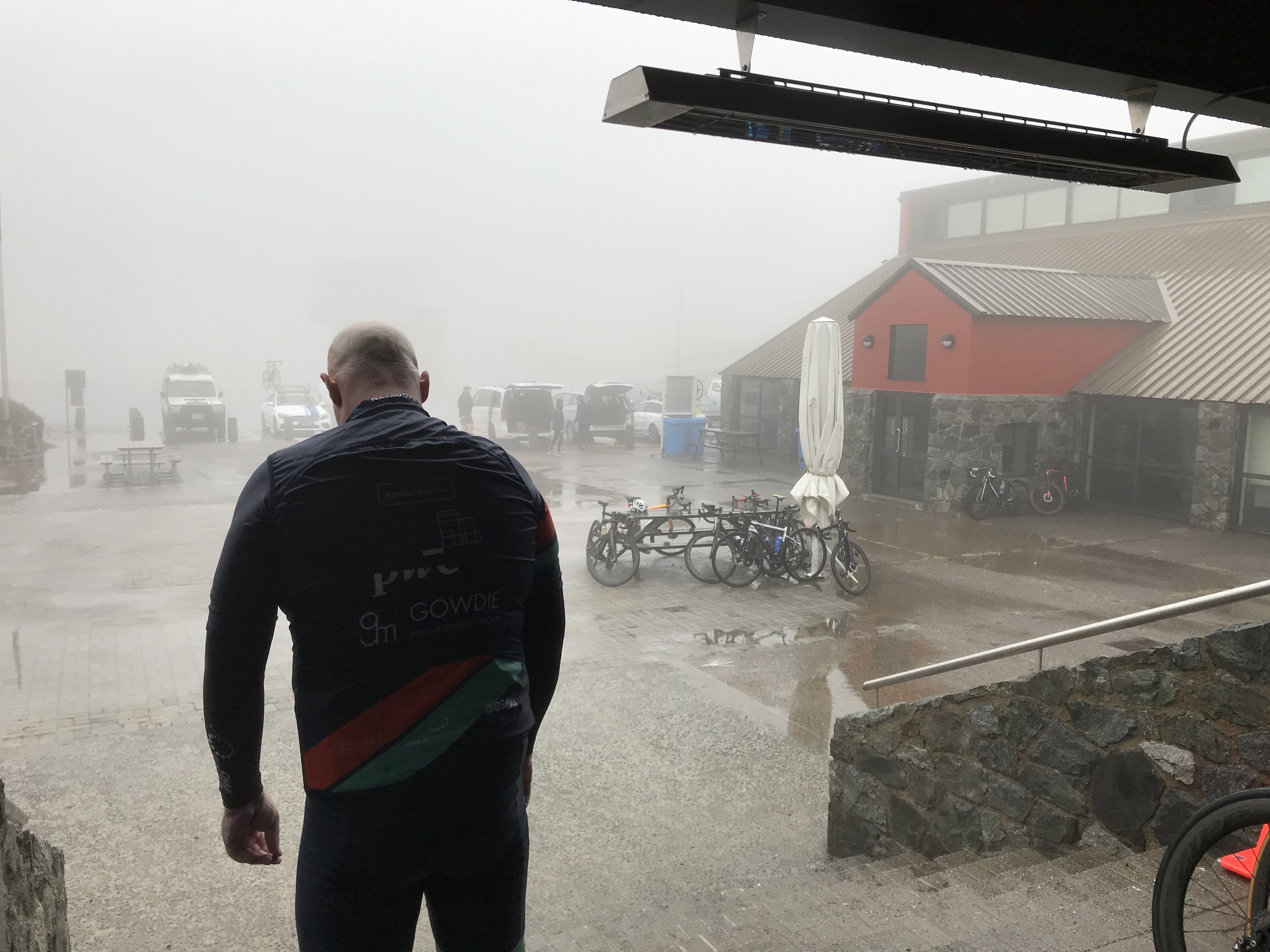 I mentioned the thrill of the descent but different people have different highlights of course. We passed these enormous electricity stations, and came to a ridiculous dam built into the side of the mountain, and the boys from Transurban in the peloton were pretty bloody excited by the infrastructure and the vision and perservance it would take to set up in on the side of a stonking big, remote slope. To be fair, the Snowy Mountain Scheme does seem very special. A work in progress from 1949 to 1975. 100,000 workers. 65% from overseas, 30 countries between them.

We re-grouped at the bottom of the hill and we knew from the previous night’s briefing that we then had to deal with a 12km climb. There was a suggestion that if anyone was challenged by that, they could get into the “sag” wagon, which does look rather enticing, with a stereo, and climate control, and some German engineering, but there’s a lot of pride in the peloton, and we all went up. Your mind tends to swirl around on these trips. You start by wishing for the downhills, and then you realise that every downhills proceeds an uphill, and you are keen to just lock horns with the hard stuff. The twelve kms started as a beautiful gentle ride down along a brook but then it climbed and climbed. The Gowdie team seems to have mastered the ability to talk under any conditions but otherwise there was a lot of heavy breathing and some not-so-attractive faces. But we all made it. Fabulous drinks stop at the top (complete with lollies and soft drink as well as the standard fruitcake and fruit) and then we had another fantastic 20km descent. 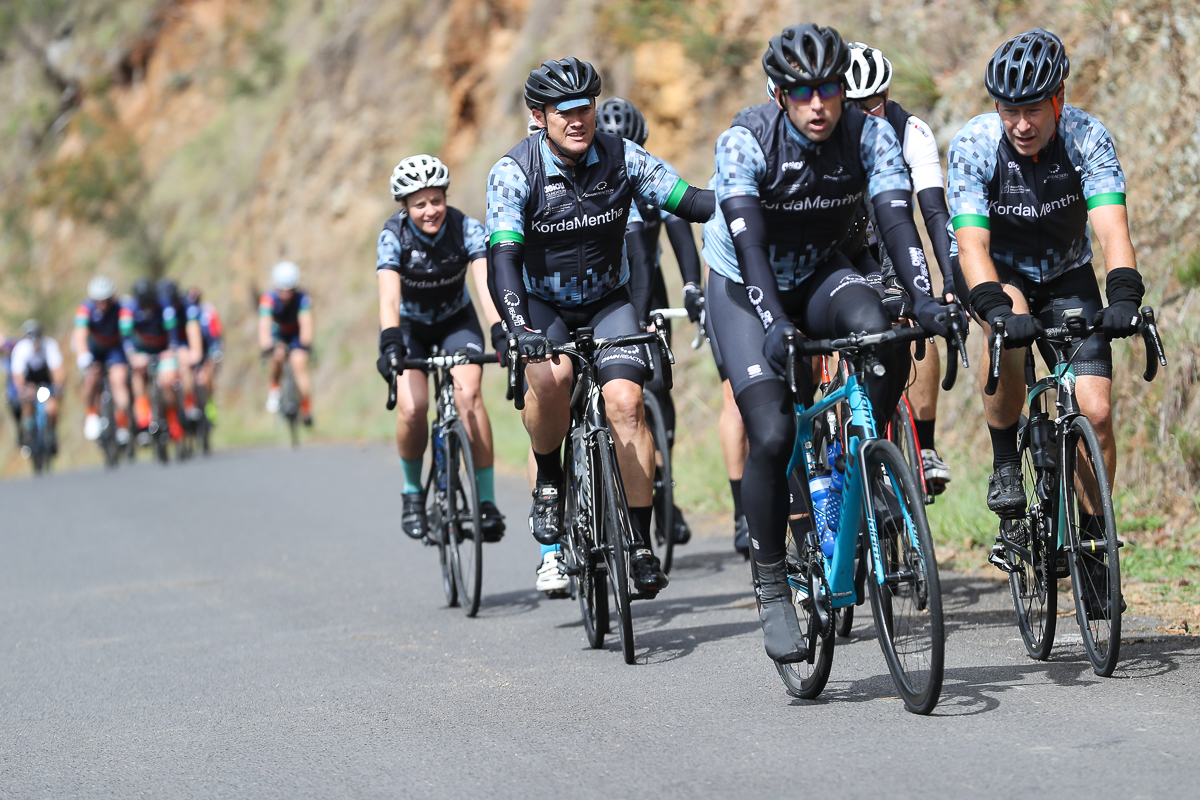 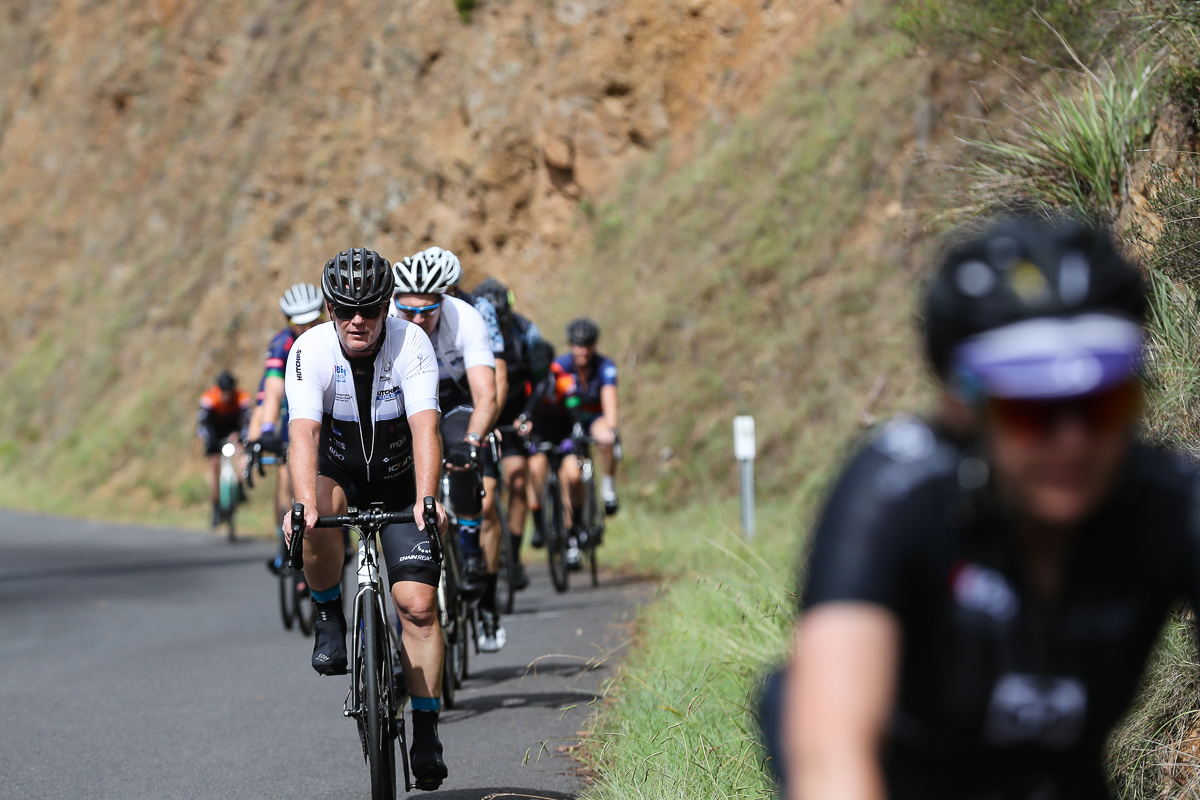 That second descent was an absolute treat. Racing down through the lower foothills, grasslands, grazing cattle, creeks, eucalypts. And then screaming into a plane, near Tumbarumba (birthplace of our Pete Forbes...) where a bus was ready to take us through to Corryong for the night.

Cutest town ever. 1800 people. Three little hotels that we are sprinkled between. Celebrate a Man from Snowy River Festival each year. Home of Lee Kernaghan. But best of all it was where a famous dog, called Horrie lived out his days. He was a dog adopted by the 2/1st Machine Gun Battalion in Egypt during the Second World War. But it turned out that he had this superpower – he would bark 15 minutes before the German planes came over the horizon and give the soldiers time to take cover. He got sunk on a boat but he swam to safety and he got hit with shrapnel, but he survived. He had a tough war so they made Horrie a corporal. But at the end of the war, the Commonwealth said all animals used by soldiers had to be destroyed. Horrie’s owner, Private Moody, hid in a suitcase with a secret bottom and took him home to Corryong. Some silly bugger wrote a book about Horrie and then the Government insisted that Horrie be given up for destruction. But legend has it that Private Moody switched Horrie with a dog from the pound, and Horrie lived out his days in this very village. True story.

The afternoons on these rides are the highlight for this blogger. Riders quietly discussing the issues of the day, with a mixture of pride, relief, and comfort. And the conversations are kind of free and random. Today, I listened to Gorgeous George (the masseuse) and one of the riders debating how it happens that the animals have the whole forest to themselves but they end up dropping manure on the road. They decided it was due to the heat of the bitumen, but who’s to know?

We have just finished the dinner and presentation for the night. Sunkids spoke tonight with a moving speech from Sue-Ann about the work that Ronald McDonald House Charities do, and an audiovisual piece introducing all the team members.

Another great day. Love you all. Home soon, bigger and better.